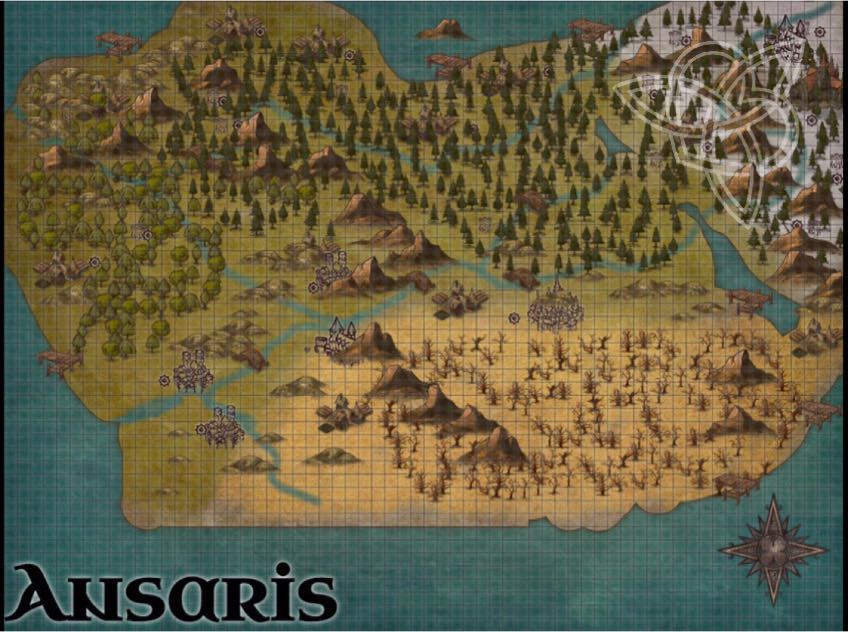 The locations of each school/fortress are strategic positions. Moreover their positions are based on the trinity and fellowship. they use the natural protection of a snowy wasteland to protect their backs [semi inspired by Exodus 14], but their fronts are dependent on the unity of their components[1 Corinthians 12:15-21]. (Sea) defends [1 Peter 5:8] and watches [Mathew 25:13] the sea, (Sky) defends their brethren from the skies, and (Earth) is the frontline and guards the tunnels under themselves as well. At all costs, they defend HQ, as it holds their leaders and the children (whom the leaders are protecting and teaching [Psalm 127:3, Proverbs 22:6, Mark 9:37, Matthew 18:6])


Anthem Rise Academy has multiple schools and is also taught outside the main sects anywhere in Ansaris. This is to represent the Church and how although many denominations and many buildings, the Church is not in these things. The Church is the Body and Bride of Christ, the chosen ones of Christ and so I worked to make my schools represent that. 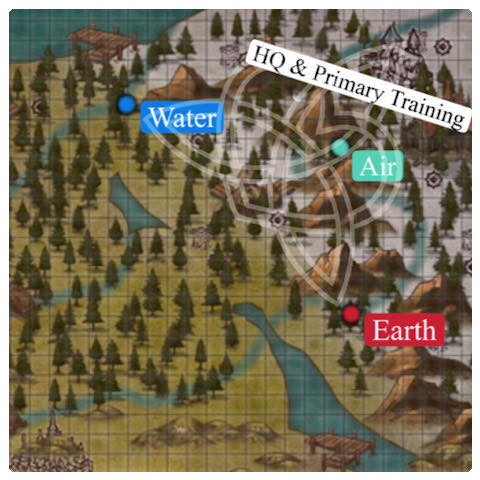 There are three milestone tests they must complete before they graduate. The grading system they use is narrative evaluation.

This trial is what we essentially do during exams… Testing our knowledge in all our core subjects including theology. They are sent to either the snowy wilderness that protects them from behind, or the wilderness of the south for 40 days.

This trial is to represent good stewardship of nature and animals. To remind them of the garden (Genesis 2), where (Jesus) began (Luke 2:1-20), and the future we look for (Isaiah 11:6-9) they choose their environment and commune with nature and the animals of that area for 40 days. Meanwhile they journal their journey.

This trial is based on the call to the wilderness from (Exodus 3, Exodus 13-Numbers 14, Matthew 4:1-11, Luke 4:1-13) 3 team members and a witness are chosen and their goal is to survive the elements. They are either sent south to the desert wilderness or or to the school’s natural defenses in snowy wilderness for 40 days. During the trial they also take moments independently to pray daily for each of their calling. Oftentimes they do this by taking turns in a secure area, to stay well protected.

This trial is as suggested a duel between students to review basics they’ve learned. The duel is a friendly sparring and the aim is based solely on winning points rather than knocking an opponent out. Main focus is to rate reaction timing, offense and defense, speed, and strength and tactics…

Once graduating, a ceremony is held for their Enrollment/Call to their next location that is if they wish to continue their education or to simply be with their family. Otherwise, all of it depends on the trials and the resources you mainly connected with. There are four other paths from here. And after their path is chosen there is a fifth and final trial done in their school that determines their light type. 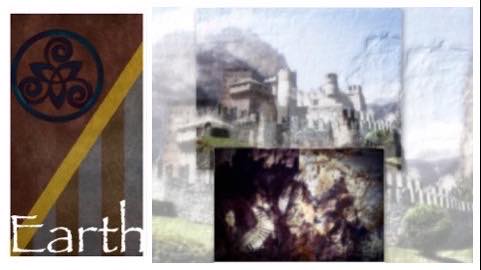 Weapons, and war machines are often designed here and sent to all other schools for defenses. This location is also the main gate into the whole rebellion’s territory. So Earth gets heavier training in defense. Students in this school are often the frontline or at the forge, making sure nobody goes underground. 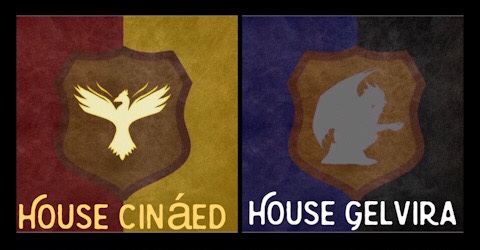 Earth’s ceremonial trial is done in a maze. Three phases in this trial includes:

after the second third of the maze (Outcome #1: door #2 a. A puzzle that requires memory which unlocks the door. b. if it is wrong, walls of stone encase them the goal is to figure out the pattern (or you will get shocked a little in the hands til you get it right) Outcome #2: a rock wall is in the way the goal is to climb it and at the top is a clue for the riddle in lettering you can only read up there in which you answer there, then monkey bars back across and above the maze leads them back to the riddle door, which is now open.)

After the third third of the maze is completed; and the pupils are in front of the school and teachers...the guardians are before them disguised as a statue (gargoyle) and a flame (phoenix) and are inactive until they walk up to them. If the flame reveals itself as a phoenix and cries then that guardian chose you and if the gargoyle lifts its head and winds then that guardian chose you.

Their curriculum is based on the acronym FORGE:

Besides being engineers, inventors and providing most of the weaponry in the academy, most everyone had basic to advance combat training in hand-to-hand combat, swordmanship, spearmanship. And others used their elements or their engineerings, inventions, and/or chemicals to rain hell upon attackers. 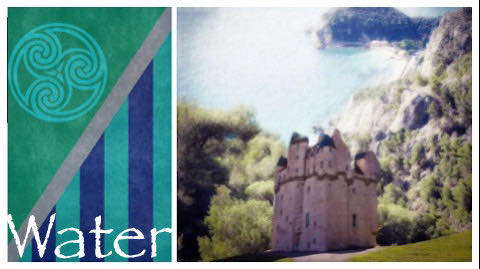 Every school has basics-trained healers but in the event where the situation is serious and cannot be done there or there needs to be a retreat for an individual to regain mental health recovery, they are sent here. They’re techniques are somewhat unorthodox as they use their a’gaerym and elements to enact healing through songs and storytelling along with counseling and medicine. In addition to this and as the second line of defense, they are the watchmen around the wall and watch the sea using the lighthouse tower on their fortress in order to signal different signs across the sea and the beacons to do the same on the land. 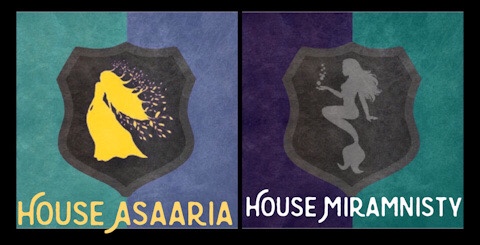 The ceremony is a lot simpler than Earth’s. A pupil will come up when their name is called and the staff will be in a circle and hold hands(or huddle together) to make an empathic link(cast by and through those with that element making it possible for all. They all will witness the pupil's drive through their emotions.

Their curriculum is based on the acronym REFLECTION: 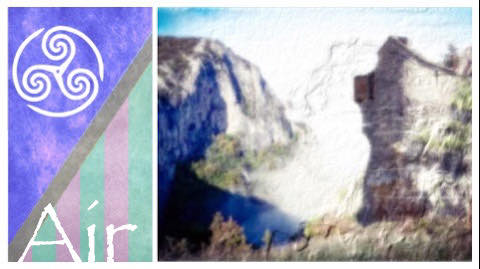 Home of the Gryphon/Dragon Riders and Hatchery Nurses, as well as Artisans, and Knowledge; this school watches and patrols the skies for the signs given from the sea and their own scouts. As the last line of defense and closest to HQ, it is their job to make sure to warn them if all else failed in all lines. At all costs the children are to be protected and they would have to escort them to a safe place. 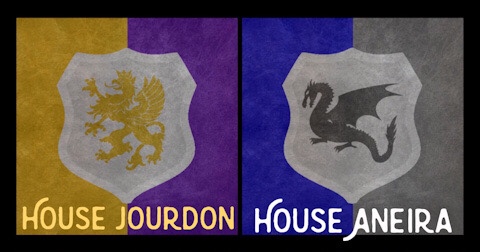 Pupils are given a quest to retrieve an object (un specified but will become clear) at the top of their tallest mountain. With traps and natural obstacles in their way...

At the top there is a Draconic Gryphon that induces a vision to reveal their true nature in a personally set scenario based on the actions in the vision, this will allow the guardian to determine their house.

That is when they will be cloaked with a robe in their house colours. Purple with gold trimmings for Jourdon, and Blue with silver trimmings for Aneira. At that point a chariot with elemental gryphon or dragon will bring them back down.

Their curriculum is based on the acronym SOARWING:


If a pupil is in the armed forces, as Gryphon/Dragon Riders they have a choice to be in the air force as well as archers, crossbowmen, two-handed infantry. Either that or they defend the Hatchery as guards, or the walls as watchmen with the Sea. Some battle tactics also include using their elements, flail, spear, etc. on their steed or from the fort/wall.

In the event a pupil has all aspects of Earth, Sky, and Sea, their calling is different from their peers. When this happens, a Master Vagabond/Pilgrim will call upon their name and welcome them as their apprentice. Their education, then will be similar to a travelling homeschooling experience. Missions will be hands-on and slightly more dangerous as they will be going beyond their north-easten comfort zone. Moreover, they will be in enemy territory. And dependent on their main goal and mission, they could be sent to spy on the enemy, on rescue missions, as messengers, or as to further recruit others into the rebellion that the academy trains for.

Curriculum as with missions are hands-on hand-chosen and agreed upon by the master and apprentice. In some instances the lessons are taught in a similar way as birds are taught to fly.

Enrollment (for all Anthem Rise Academy) is based on being called and evangelism…. Vagabonds/Pilgrims (and the Sea School’s Messengers) go out and recruit people and their families and that usually settles the adults in as part of the Family’s Alternative of the Basics in HQ...and then are given the same options citizens of their territory are given.
at December 04, 2019

S chool Locations The locations of each school/fortress are strategic positions. Moreover their positions are based on the trinity and fel...